This slow cooker ham recipe is moist and fork tender!

This Slow Cooker Ham recipe is my “go-to” recipe when cooking a ham dinner. It is so much better than the traditional oven “baked ham” because it consistently produces a delicious, tender, moist ham that will be an easy focal point for your ham dinner.  This ham recipe is delicious and can be adjusted for cooking uncooked hams, precooked hams, smoked or dry cured hams and brine cured hams. You can use this recipe to cook ham shoulders, butts, and shanks. The ham will be visually beautiful (perfect for a holiday ham dinner) and everyone who tries thisrecipe has great success with it.

I use this recipe for Easter dinner every year. We like to eat Easter dinner about 1:30 PM after we get home from church so I time the ham so that it is done for 1 PM.  That gives me time to get my side dishes cooked and the table set. I do a lot of my Easter dinner preparation the night before.  On Easter, it’s just a matter of putting things to heat in the oven and on the stove top during that last hour before dinner. And this ham recipe frees up oven space for more Easter side dishes to cook like my Bacon Wrapped Asparagus or my Twice Baked Potatoes. Having free stove top and oven space allows me to make a complete holiday menu timed perfectly to arrive at the dinner table with the Slow Cooker Ham as the centerpiece. This ham dinner is great in the summer to as using a slow cooker doesn’t heat up the kitchen the way the oven does. I do heat my pre-cooked potatoes in the microwave and foil packs of vegetable on the grill.

A few things to remember when cooking your slow cooker ham…..

A slow cooker ham recipe can result in a delicious succulent dinner loaded with flavor but like anything else you have to follow the directions.  For more facts and information on ham check out the USDA website. I hope you enjoy this slowcooker ham recipe. 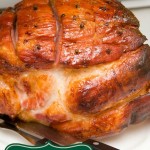 This slow cooker ham recipe will result in a fork tender baked ham and the liquid left in the pot can be made into a delicious sauce to be served with the ham. This ham recipe is meant to be prepared in a large slow cooker/ crock pot – 7 qt. or larger.

This slow cooker ham recipe is perfect for Easter Dinner. For more Easter Ideas from the Wilderness Wife check out these pages –

Do you love slow cooker dishes? We have lots of them here at The Wilderness Wife so check out these tasty ones –